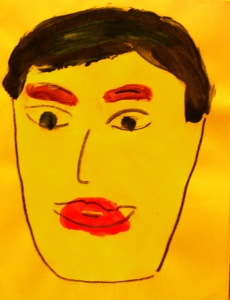 (Last week Chartan tells Brazil he wants to be a father while Gina tries to distance herself from Julie.)

“Didn’t you ever think about why we got married an hour after meeting?”

Brazil watched tears roll down Julie’s cheeks. He hadn’t given their marriage day any thought and he wasn’t going to lie to make her stop crying.

“I’m moving back to my place for a few days,” he said. “I need time to think, be alone. Understand?”

They were standing a few feet apart from each other in the middle of Julie’s living room.

“I’ve never had anybody love me,” she said.

Brazil took a step forward and grasped her chin with the burly fingers of his right hand.

“I’ll be back. Is that good enough for now?” He eased his grip and dropped his arm to his side.

With eyes like wet rugs, Julie asked, “Do you love me?”

“Sure.” He gave her a quick kiss and left.

Twenty minutes later he opened the front door to a dark, 1,000-square-foot house that on the outside ooked like all the others on the block. He hadn’t been in it for two weeks, or slept in the bed for over three months, yet, he knew he was home even though he could leave it tomorrow and never miss it. He sat down on a sofa and pulled out a wallet. The slip of paper was heavily wrinkled but he could read the 10 numbers—he didn’t recognize the area code.

With a cell phone pressed to his ear, he tried to slow his breathing. Funny, it’s like I’m nervous, like I want this call to take me away from the mess I’m in with Julie. Probably some clown selling cremation services.

Brazil blinked. The one-word response from a deep male voice caught him off guard.

“I’m calling the number I saw on a poster—I’m a combat vet.”

To be continued next Sunday…