My son was married yesterday. Derek and Vina Steffen laugh well together. It was, indeed, a happy event.

I planned to share one of my rambling stories about the passage of time between father and son and how certain memories surface at the oddest times, but then came tequila shots… so I will bare my soul today.

One day last Century I did a version of the alligator crawl faster than 200 other men in a competition of sorts. The reward was a three-day pass from basic training in the Army—unfortunately, I had to come back after three days.

Later a drill sergeant asked me to demonstrate my technique which was based on fear. He said he’d never seen anyone move as fast as I did, crawling under barbed wire with a fixed machine gun and the “sound” of whizzing bullets overhead. I had never done the crawl prior to being drafted. It was a motion that came naturally. That was 1969.

Seventeen years later my son decided to rival my crawl. He was a one-year-old who, rather than walk, favored sliding on his belly to get from Point A to Point B. A doctor put him in a large room with two-way mirrors. We observed him speeding around on his stomach. “He’s very fast,” said the doctor who concluded that my son did the alligator crawl (exact same movements as I had done) because it was “naturally” his most efficient method of transportation. Oh, yes, my son started walking a few weeks later.

Weddings are about new beginnings, but for a moment yesterday I went back to the time I looked through that glass at a small person on his belly and wondered about his first steps .

In the past month I’ve posted thoughts on war, texting while driving, smoking clowns, reclining dogs and punching your way out of a paper bag.  There is a sense of purpose to what I write, photograph and paint (I use this last term loosely). Here is the “why” of it all:
Creative thinking should not be tantamount to driving a car safely by staying on one side of the street; sometimes you have to swerve. Sure, you’ll lose followers, but a mental wild ride will attract those who don’t want B to come after A—those are my kind of thinkers.

A few days ago I posted a photo of Sammy napping on an oversized chair. Here is his counterpart, Daisy, who actually spends more time on the chair than her “brother.” What is she thinking?
1. Sammy is such a dog.
2. Don’t expect me to bark?
3. My dinner is late.
4. (Supply your own caption)

I’ve lost count on how many job seekers I’ve interviewed over the last blah, blah years. Fortunately, for me, my role as interviewer has surpassed my role as job applicant. So, I’ve developed a list of my three biggest personal mistakes made when seeking employment.

As for mistakes made by job applicants—as I see it, it takes guts to seek employment. And I can honestly say that I’ve never met anyone as poorly dressed as I once was in my cowboy days. 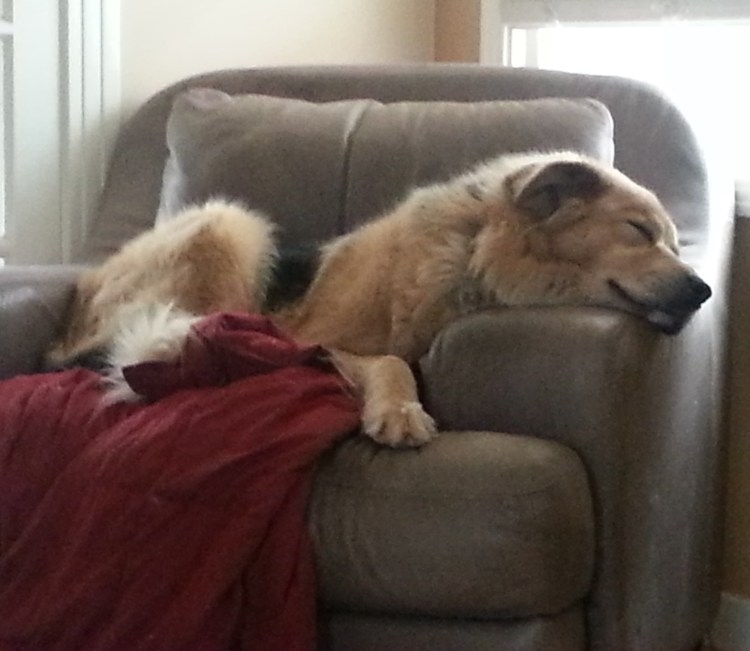 Our dogs love this soft oversized chair. Please pick a caption for this photo:
1. So many bones, so little time.
2. That was a long walk.
3. Steak would be nice.
4. (Post your own thoughts for Sammy)

Home is a great concept. It is both physical and metaphysical. For me home provides warmth, shelter and the “ability” to get through the night.  Home is what I make it.

I find it remarkable how pelicans land on ocean rocks at seemingly high speeds without a scratch. These rocks look smooth but I can attest to how easily they can cut you if you rub your hand across them. Fortunately, I took this photo without needing bandages afterwards.

Pelicans are loaded with air sacs that help them make smooth landings, or dive-bombing forays into the ocean for food. And nothing rivals the WWII feel of a pod of pelicans gliding silently over the shoreline near sunset…it is an “incoming” moment. And while they often fly low, they can go as high as 10,000-feet under the right conditions.

Since the pelican is state bird of Louisiana, it is not surprising that the state’s pro basketball team, the New Orleans Hornets, will change its nickname to the New Orleans Pelicans at the start of the 2013-14 NBA season. Sports bloggers have laughed at the new name, calling it “goofy,” at best. These bloggers don’t know pelicans.

After a three-year layoff I’m back in the squat. This photo is a self-portrait taken today at the end of 90 minutes of catching during hardball batting practice. Lots of dust, heat and a handful of wild pitches—I got most of them. However, near the end I lost my balance while in the squat and toppled backwards, befitting a “backstop” who has caught his last pitch for the day.

Here are some personal stats: I caught my first no-hitter 55 years ago; I went 46 years without a hit because I didn’t play; and I love the game of baseball in all aspects, from fan to player.

I practice with guys my age, a few younger, a few older, once each week. We chat about aches and pains, MLB and health stuff like the downsides of taking statins. Five years ago we played serious games(umps, fresh foul lines, and scorekeepers), but now we are in the a prolonged pre-spring training workout mode and that is fine with me.

Why do I do this? Simple answer: I love knowing I’ll do better next week. 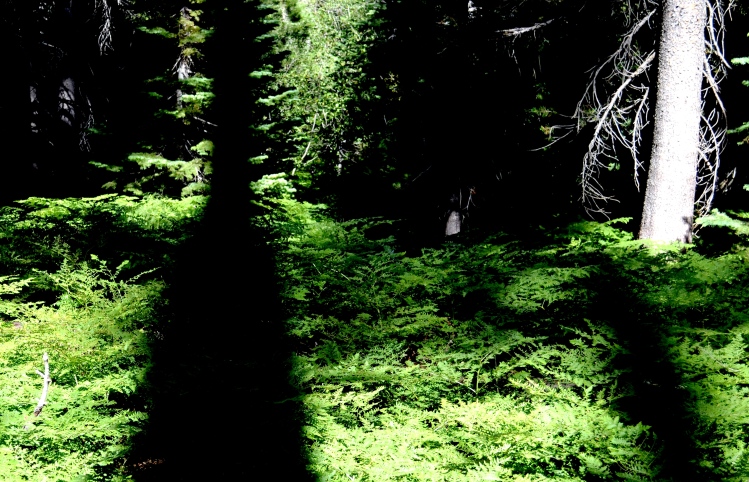 I stood in an alpine forest last week with the sun behind me, its light filtering through giant fir trees that formed crosses on a grove of ferns in front of me. Other people might have focused on the bright green fronds escaping the dark shadows, but I saw shadow crosses because religion, for better or worse, has been part of my life.

In this fern grove I went back 40 years ago to an interview I did with an eye doctor who worked with poor kids, the ones who didn’t know that wood to build houses comes from trees—they only knew concrete. He said they don’t see what we see because their world was confined to apartments, sidewalks, police sirens and images on TV. I later guided teenagers from an inner city through a California redwood forest. They didn’t know about the tree to house routine. But they savored the sound that wind makes and the low light courtesy of trees that towered over them. Their senses were on fire, eager and excited.

The joy of this long ago moment was tempered by something else I saw in this fern grove: the crosses of war from 9/11, the crisis in the Middle East and all the troops we’ve lost in Iraq and Afghanistan. The cross that once stood for “he died for our sins” has become a tragic marker for nameless lives lost—and that’s what I see, Mr. Eye Doctor.